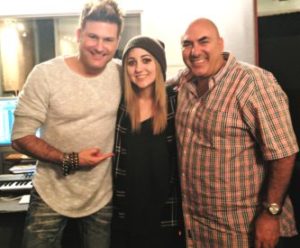 Adam H. is in Australia and he’s bringing the heat! Currently in the Recording Studios in Melbourne, Australia Producing the debut single for X-FACTOR Television Series alumni, Martika, Adam H. and the team are thrilled to be working with such a dynamo, and her exceptional label in Australia!

Stay tuned for the debut single, entitled “The Last One” which Adam H. co-wrote with Swedish hitmaker, Marten Tromm, and features the incredible guitar work of Jerry Wong! Mixed by Grammy Award Winner, Orlando Calzada and Mastered in New York by Larry Lachmann, this single is slated for a late 2017 release worldwide!