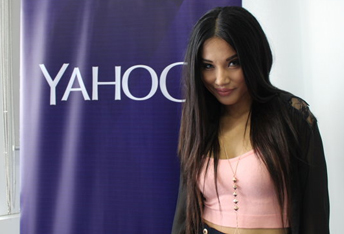 Congratulations to XOXO’s very own, Elise Estrada for landing the front cover of YAHOO! Ms. Estrada continues to dominate radio, television, and the media in Asia with the release of her new album, #ROUND3! Showered with exceptional album reviews, Elise Estrada has rapidly catapulted to become one of the most exciting Pop Stars in Asia!

Celebrity Music Reviewer, Rain De Campo writes:
“There are studio albums that sound so bloody predictable that no matter how great or big the artist is, the songs get so darn boring that you just want to stick to the song that’s currently being played on the radio – #ROUND3 is not that kind of record. Saying that it’s a wonderful album is already an understatement. Kudos to producer Adam Hurstfied of XOXO Entertainment!”

If you do not have your copy of ELISE ESTRADA’s critically acclaimed new album #ROUND3, it is available around the world on XOXO/UNIVERSAL MUSIC, and in S.E. Asia on VIVA RECORDS!