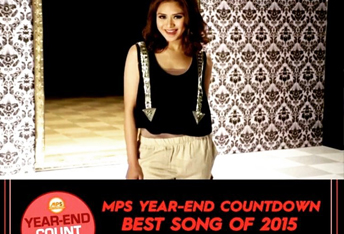 Talk about a Happy New Year!
It’s no secret that the Sarah Geronimo “Perfectly Imperfect” album took the world by storm in 2015, and the results are in… the “PERFECTLY IMPERFECT” single written by Adam H. Hurstfield, Elise Estrada, Jerry Wong, and Vic Levak, and Produced by Adam H. Hurstfield (Mixed by Orlando Calzada + Mastered by Larry Lachmann) won the entire year as the #1 Most sold single, #1 Most downloaded single, #1 Most Played song on Radio, #1 Most played Music Video, and #1 most streamed on Spotify in se Asia!!!
This marks yet another magical moment for Team XOXO, their wonderful teammates, VIVA Entertainment Asia, and superstar, Sarah Geronimo!